A HOME AWAY FROM HOME FOR THE FRENCH TRAVELER

check back soon for more information. 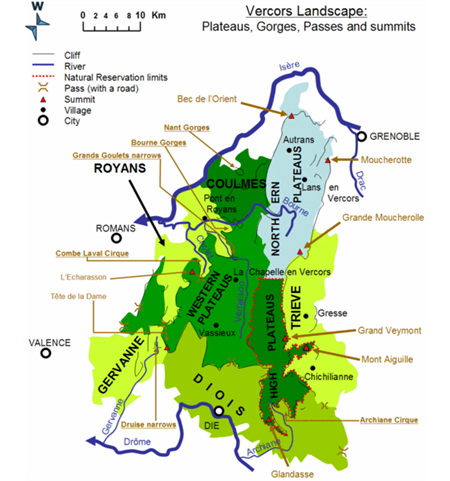 The upper valley of the river is known as the Tarentaise.  The middle valley, an alluvial plain stretching from Albertville to Tullins, is the Grésivaudan, or Valley of Grenoble.  Commune de Chatte is located in the southern part of this valley, in the area known as the "Bas-Grésivaudan" or "Sud-Grésivaudan."

Departments are further divided into several smaller units, including cantons - similar to counties or townships, and communes - similar to towns or villages.

Commune de Chatte is one of the 17 villages within the canton of Saint-Marcellin.  On Saturday mornings, a short trip (3 km) into the nearby main town of Saint Marcellin will reveal a delightful open air market filled with fresh produce, local cheeses and regional specialty foods, as well as linens, clothing, and other wares typical to the area.  A smaller market is held on Wednesdays.

There are many shops in the area around the market square, as well as a movie theater, several restaurants and brasserie, and the "court" where the locals play boules, a game similar to the Italian bocci.  The Prommenade du Joud, offers a stroll down a tree lined path bordered by a small zoo, and views of the town, a nearby aquaduct, the Isère River, and the Vercors mountians.

While in town, don't miss an opportunity to purchase some of the local cheese, called "tomme de St. Marcellin."  According to legend, this cheese first reached notoriety in the 15th century when two local men rescued the Dauphin -the future King Louis XI - from an attacking bear.  Following their heroic battle, the men offered their Sovereign some bread and cheese.  With the reward they received, they began to produce the cheese on a regional scale.  You can learn more about these small, round wheels of cow's milk cheese at the cheese museum on the town's central square.   When purchasing tomme, remember that the cheese is very soft when young and becomes firmer as  it ages.  The  white rind is meant to be eaten as well.   The best way to decide which one you prefer is to select several, pair with a fresh baguette, and perhaps a bottle of Cote-de-Rhone, and sample them all!

Another regional specialty is walnuts.   From the nuts themselves, to walnut oil, and all types of  wooden utensils and decorative items.  The delicious walnut oil lends a distinctive flavor to many of the local dishes.  Try a simple salad dressing of walnut oil, wine vinegar, grainy mustard, garlic, and salt.  Tossed with fresh greens from the market, the depth of flavor is sure to please.

For a simple supper, the Raviole du Dauphiné, made in nearby Royans, is a local staple.  Yes, this is a traditional French pasta!  Called "des pates," or noodles, these tiny squares filled with cheese & parsley, cook in only a minute.  Topped with freshly grated gruyere cheese, they will provide a satisfying repast with little effort.

The nearby villages of Saint-Antoine-l'Abbaye and Chevrieres offer picturesque scenery.  A very beautiful XI century cathedral and abbey in St-Antoine has been undergoing a thorough restoration for several decades.  There are artisans in residence, with shops for their wares, and a concert series, featuring the fully restored 1748 Samson Scherrer organ, in the cathedral.

Across the Isere River, the Parc natural regional du Vercors, at over 130,000 hectares, is one of the largest protected tracts of forested mountains in the country.  Officially designated as a park in 1970, the Vercors area is home to many small communes.  During World War II, this limestone plateau peppered with caves, served as the home of the French Resistance movement.  The area now contains several hundred monuments to the Resistance, including a memorial center at Col de la Chau.  In more recent times, Vercors has become a popular tourist destination frequented for skiing, hiking and spelunking.

Beaux Reves is located in the Rhône-Alpes region. Régions are the highest level political divisions in France. To say someone is from the Rhone-Alps is kind of like saying that they are from northern New-England.  On average, French regions are about the size of the US State of Vermont. Rhône-Alpes is located on the eastern border of the country, towards the south. Portions of this region share mountainous borders with Italy and Switzerland. The region was named after the Rhône River and the Alps mountain range. One of the wealthiest regions in the country, its capital, Lyon, is the second-largest metropolitan area in France, after Paris. Officially, regions are relatively new to the country, having been created only in the 1960's, and currently have no legislative authority, however, the French school system and much of the public infrastructure are financed at the regional level. Regions are divided into départements 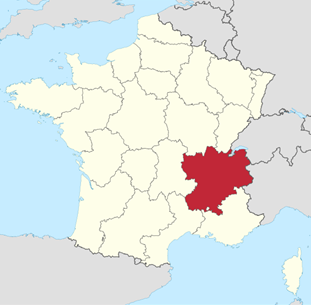 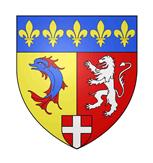 Isère is the département in which Beaux Rêves is located.  Departments are much older political units than regions, and people tend to identify themselves with their department like people in the US identify themselves with their home state.  Each department is assigned a 2 digit number - Isère is 38 - which is used as the first 2 digits of the local postal codes, appears in auto license plates, and is part of all personal ID numbers of people born there.   Like many of the departments, Isère is named after the river which flows through the area. Isère was also the name of the ship which delivered the Statue of Liberty to New York Harbor.  The Isère River originates near the world renowned ski-station of Val d'Isère, in the department of Savoie, and it flows into the Rhône River at Pont-de-l'Isère, near Valence, in the department of Drôme.